On Monday year 3 and 4 began their Olympic topic.  The day was split into three parts; Olympic Art, An Olympic Maths Measures lesson and a literacy lesson about the Battle of Marathon.

In the Olympic art lesson, the children took inspiration from the Olympic logos, mascots, colours and sport pictogram's.

Each child was given a small square of paper to draw, paint, or stick their Olympic design.  These designs were then joined together to make one big patchwork design. 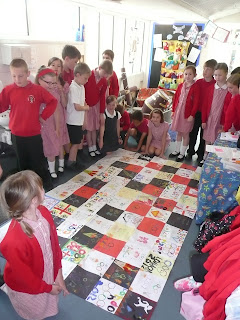 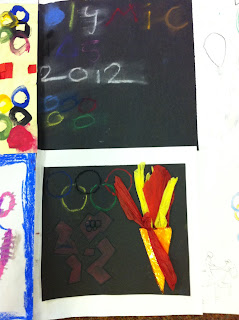 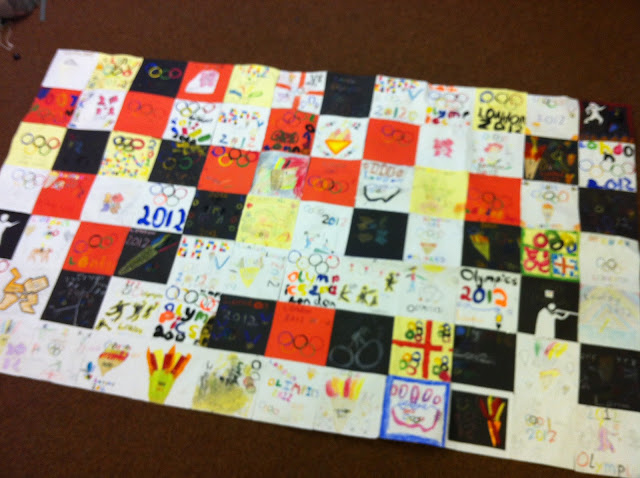 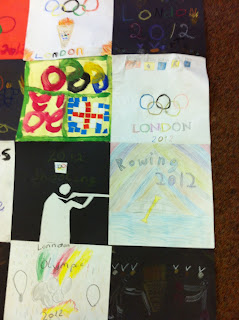 In the literacy lesson, the children found out about the Battle of Marathon.

The Battle of Marathon

The city of Athens was a thriving and wonderful city. It also had a very small army and no king or queen.   Many other kings from far away eyed Athens as a prize colony to add to their kingdoms.  So one day the far away Asian country of Persia took action and sent their army out to capture Athens.

Of course, when the Athenians heard of this they were extremely scared. They asked other cities for help.      They particularly wanted Sparta to help but unfortunately Sparta was in the middle of a religious festival.
During this festival the Spartan's could not go into battle or else Pan, the God they were worshiping, would become angry at their disobedience.  However, they promised to pray to Pan to help the Athenians.  Pan heard them and promised to send a disease to afflict the Persian army.  This did not comfort the Athenians much, but the Persian army was drawing nearer and they had to fight.  An Athenian general devised a war plan the night before the Persian attack that was original and had never been used before.
The next morning, a battle began at the Battlefield of Marathon.  The plan worked well, and confused the Persian Army. Then, the Athenians saw the Persian soldiers were breaking their ranks and nothing could get them back to order.  When the Persian army had been confused and worried, the disease Pan had promised suddenly attacked. This disease still exists today.  It is called panic.

The Persian army was easily defeated and one Athenian soldier, who also happened to be a runner, went and told the citizens of Athens of the victory.  The distance from the Battlefield of Marathon to Athens, which can be confirmed today if you ever go to Greece, is 26.3 miles. The run to the city was historic in its own little way.   How do you think marathons of today were named?

When the runner finally reached the steps to the city of Athens, he could run no farther.  He collapsed on the ground and said a final word, "Nike!" This means victory in Greek.  Then he died.

The children thoroughly enjoyed the day.

Ryan B said, 'I cut my picture out so that it looks like the sports pictogram.  It looks really effective.'

Rachel said, I enjoyed the art as I saw everyone's creations.
Posted by Mrs Devine at 08:58

Email ThisBlogThis!Share to TwitterShare to FacebookShare to Pinterest
Labels: Year 3 and 4