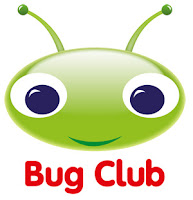 Well done to all the KS1 children who have logged onto Bug Club over the half term holiday. Some of you have been very busy reading and many of you are now using the maths games.

Just before half term a couple of parents asked advice about how to log on, because they could not get their account to work properly. Below is the latest help from Bug club on which browers to use. Hope this helps.

Some newer parts of Bug Club have been developed using the latest HTML5 technology. These parts will not function correctly in Internet Explorer 8, therefore for an optimum experience using Bug Club from the end of October 2013 we recommend upgrading your browser.


The internet browsers we will continue to support over the next academic year are as follows:


If you or your institution uses Internet Explorer 8 – or a lower version- please contact your technical support team in the first instance, to confirm how to go about upgrading to a current version.

If you are running Windows XP you will not be able to upgrade to a newer version of Internet Explorer, so in this instance we recommend using Firefox or Chrome.
Posted by Mrs Matthews at 14:58 No comments: 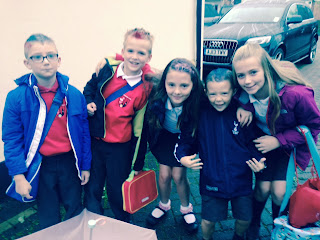 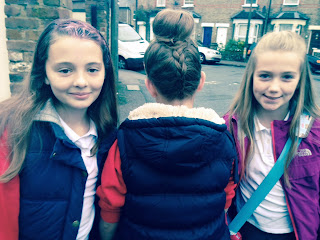 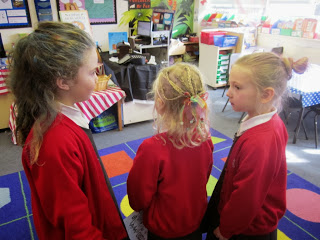 As you know the children were invited to come to school with Hair that Rocks, in return for a Christmas Bazaar donation. Many thanks to all who took part.
Posted by Mrs Matthews at 19:09 No comments: 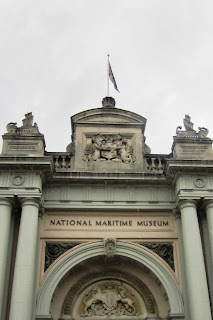 In KS1 we have thoroughly enjoyed our Pirate topic
We have learnt a lot about historical characters such as Anne Bonny and Blackbeard, we now know the difference between the flags the pirates flew and what they meant, we have designed and made pirate hats, learnt about the oceans of the world and have answered many of the questions we had before we started.
As a drawing together of our knowledge and a real hands on practical day we decided to visit the National Maritime Museum in Greenwich.
We set off on our galleon coaches and arrived in a state of great excitement. Our first sight was the amazing outside of the building and then as we walked to our base for the day we had to pass a female pirate who appeared to be lazing around on a wooden bench. She was quite scary and growled and scowled at us as we passed.
There were 3 parts to our day and the children would like to tell you about them...
﻿﻿﻿
1) Pirate school - "This was the best part of the day. The pirate made us take the pirate oath. She was very scary and shouted a lot. She told us about guns and flags. She had a hard tack biscuit that was really hard. She taught us about pirates. We made up pirate names. I loved pirate school!"
All the adults on the trip agreed with the children that Pirate school was scary but great fun.
2) Looking for Treasure - During the session the children were able to investigate the general galleries and sketch what they saw in their own treasure chests. "I loved seeing the spices an the map. We made music with the shells. The golden ship was amazing! I saw lots and lots of lamps. We found the oceans on a giant map. There were lots of gold coins. I saw a ship in a bottle".

3) The interactive gallery - This was a special gallery for children and after a short introduction and recap on their learning so far, the children were free to explore. "I sank a ship with a cannon. I found the coffee in the kitchen. We drew maps. I found Anne Bonny and Blackbeard! We talked to each other down the tubes. We used the crane to load the boat. We steered the ship."


All the children agreed that this was a fantastic ship and when we got back to the classroom this week, they had all learnt lots of new facts about Pirates and the world.  Thank you to the adults who accompanied us, we hope you enjoyed it as well.
Posted by Mrs Matthews at 10:48 No comments:

Here at Christ Church, we like to introduce the children to a wide range of experiences. These cover the unusual, such as the Karate instructors who visited to introduce the school to the discipline of their sport, to useful, such as the PCSO who came to talk about personal safety. This week we were more traditional and held a special service, in church, to celebrate Harvest.
The children were invited to show many of the school values, especially those of generosity, compassion, sharing, responsibility and respect, by donating food to the Ware food bank.
During the service we celebrated the Harvest, we looked at the difference between our wants and our needs and we thanked God for his provision to us and love for us.
John Hookway, our vicar, tested our gardening knowledge by challenging us to identify a variety of seeds, Reception sang Dingle dangle scarecrow and the older children read the readings and prayers.
Afterwards we had several emails thanking us for the service and one grandparent comment that is was wonderful to see that children still follow the important traditions and he was pleased to be able to share this with us by attending the service. 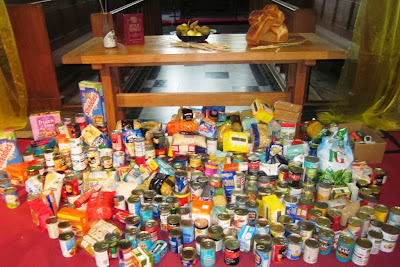 Posted by Mrs Matthews at 10:12 No comments:

In Year 1 and 2 we have been busy with lots of different types of maths activities. Some inside and some outside. Maths is fun! 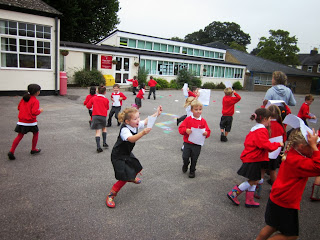 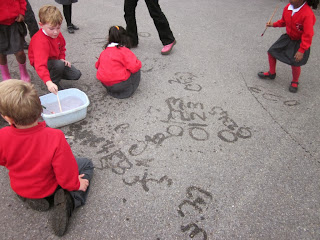 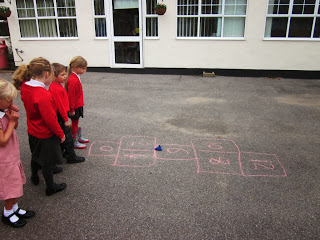 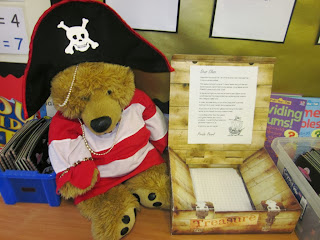 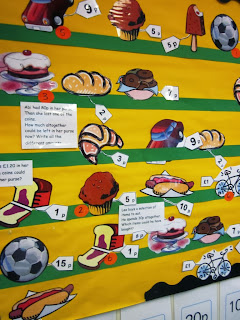 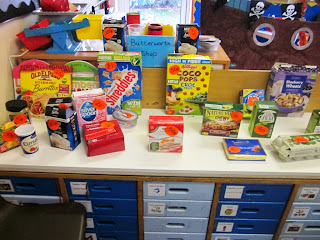 Posted by Mrs Matthews at 19:28 No comments:

Hargreaves class was the first class in Keystage One to hold their class assembly and join me learn session. The children entertained their family and friends with a pirate parade, an art show, by singing about pirates and about how to pray, by sharing some of the information they had found out about Captain Blackbeard and Anne Bonny and many other things too numerous to mention.
After this, their visitors joined them in the classroom and watched a "Big Maths Beat that" test and then helped their child design and make a pirate hat. The children enjoyed having visitors and were justifiably proud of themselves for both their assembly and their hat designs and millinery skills!
Thank you to all who joined us. We look forward to seeing Butterworth and Potter later this term.
Posted by Mrs Matthews at 17:20 No comments: 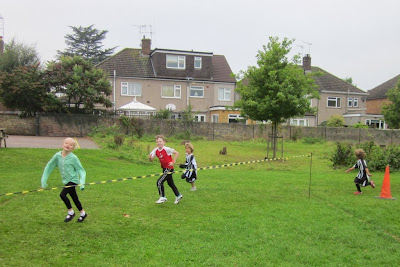 Everybody thoroughly enjoyed taking part in our first ever Christ Church Chase on Wednesday. We were fortunate that the rain held off and the children all did extremely well in fulfilling their challenge. 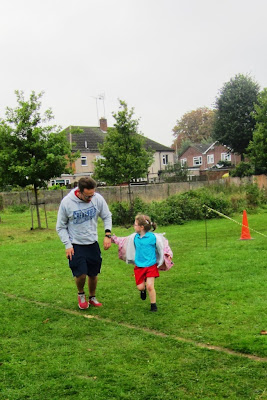 We will advise you of how much we have raised once all monies have been collected and counted. 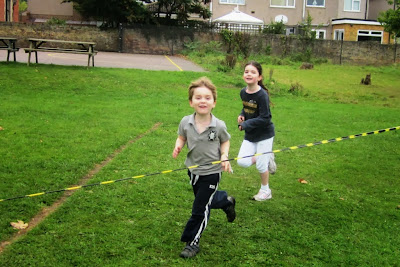 We would like to take this opportunity to thank everyone involved, from organising, marshalling to sponsoring a child. We could not have done it without you. 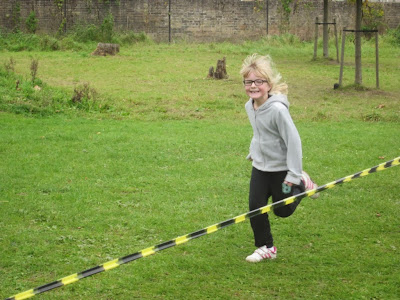