A Blast From the Past!

On Tuesday 19th July years 5 and 6 put on a stunning performance of the play 'A Blast From the Past'. Although it is tradition for the year 6's in their final year to have an opportunity to have the starring roles, there is still a lot of effort and hard work put in by the year 5's. Ruby Steele from Shakespeare class tells all about the performance and what it was like to be a year 5 in the performance of the year.


'Our school play was extremely funny, although I did struggle to understand most of the jokes. It was about two kids who didn't want to go to school and it showed you what happened in past years in schools. Personally, my favourite bit was the fashion show part. I loved the 1970s outfits. My second favourite part was the photographer scene as everybody laughed! Part of me found it quite boring just being there to sing, although I know we added a lot to the play. I was lucky enough to have a small role as a 'milk girl', which I enjoyed but did find a little embarrassing. Overall I loved the play as it was quite funny, and everyone who came to watch seemed to enjoy it. The year 6's did a great job on thier last play and I look forward to being even more envolved next year.'
Ruby Steele, Shakespeare Class, Year 5
Posted by Miss Ball at 10:00 2 comments: 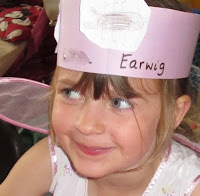 Today McKee class rounded up their Minibeast topic by holding an Ugly Bug Ball. This was a way to bring together the six areas of the early years curriculum and have fun at the same time. This is what they say about making the food:-
"I liked making the jelly, it was delicious. I liked putting the worms in the jelly. I liked pouring the jelly.The butterfly cakes were good and the icing tasty. I liked being able to lick my fingers when I had finished icing the cakes. I enjoyed putting sprinkles on my cake. It was fun putting sweets on the biscuits. I liked icing the biscuits."
The children wrote an invitation to their learning partner, decorated an information letter for their parents, made hats and chose a name for themselves using alliteration e.g Ellie Earwig or Ben Butterfly. They also decorated a welcome banner and decided we would play games and dance.
After lunch everyone got changed into their ballgowns, party clothes and bug costumes. We then walked around the school grounds before presenting ourselves at the door of the Ballroom (our classroom). Mrs Johnson helped the guests line up, Ms Wood officially announced each guest and Mrs Matthews checked their invite and took their photograph. Then the Ball began.
"We played lots of fun games. I loved the dancing. We played a colour game and musical statues. We played a game with Blue Dog. We danced. We hunted for a toy. We played 'famer in his den'. We sang songs. We had a tea of cake and biscuit and jelly and a drink. It was the best party ever!"
The children showed lovely table manners as they sat and ate together and thoroughly enjoyed playing traditional party games. They used their knowledge of minibeasts to prepare for the party and then enjoyed a sociable time together before we break up for the summer.
Mrs Matthews, Mrs Johnson and Ms Wood would like to thank the children for making the Ball such good fun and in the words of one member of the class "This was the best day ever!"
Posted by Mrs Matthews at 19:42 No comments:

Introduction
On Tuesday 12th of July KS1 went to Walton- on-the-Naze as part of their topic.

Arriving
When we arrived , we went to the toilet and washed our hands ready to have our lunch. In my lunch I had a chease sandwich, grapes, raisans, whatsits, a fruit shoot and a froob.

Setting off
After I had my lunch, we started walking down the promenarde. Next I had an ice-lolly.The ice-lolly was called a mister bubble, it made my tung go very blue. Everyone was amazed how blue my tung was.

On the beach
When I had finished my ice-lolly, I went down to the beach where the rest of kS1 were. First I started to make a hole. It got bigger and bigger. After 2 minutes we had made it into a stream. We put lots of water in it. After we had found the water we made a bridge over it.

I had a fantastic day at the seaside with KS1 and the teachers.
Posted by Christ Church at 15:10 2 comments:

﻿﻿This morning the children from Inkpen, Carle and McKee joined in with the Christ Church Toddler Group (which meets next door in the Church centre at various times throughout the week) for an end of term service.

We are very fortunate to be invited to share their under 5's church services. These are always age appropriate and very child friendly. This morning was no exception. The theme of the service was "God loves me".
The children joined in songs and used the instruments to help celebrate our similarities and differences. They  then compared themselves to their classmates and those around them in church.
At the end of the service each child was given a mirror to take home to remind them that no matter what they look like, or who they are, God made them and loves them and always will.
Posted by Mrs Matthews at 12:30 1 comment:

On Wednesday 13th July Sue Hampton, a children's author, returned to our school. See below her message to our children.


My name is Sue Hampton, I’m an author with twelve books published so far (fantasy, historical, mystery, humour, contemporary, futuristic...) and I returned to Christ Church on 13th July to work with Y3 and 4 and show them how much fun words can be. I had a lovely afternoon because the children were so imaginative. I enjoy the atmosphere of the school, which is relaxed but positive and enthusiastic. No one has to be a clone and creativity and individuality are valued. In assembly, when I asked why, as a woman with alopecia, I had abandoned my wig, I received a really deep and perceptive answer. If you weren’t there, perhaps you can guess what it might have been. I answered some thoughtful questions but ran out of time before I could quote Michael Morpurgo, the children’s author who inspired me and has praised my writing (three times!). He said, “A good book is not like chocolate.” I wonder what you think he meant. Personally I think a book can be a key, a holiday, a time machine, a bucket of cold water over the head, a workout... Maybe you have some metaphors of your own. But he’s so right about the chocolate!
I hope to return next year. In the meantime, I wish you all a great holiday full of good reading – and if you bought one of my books, do email me a review and I might put it on my website: http://www.suehamptonauthor.co.uk/
Posted by Mrs Vaughan at 08:18 No comments:

Our trip to Butterfly World 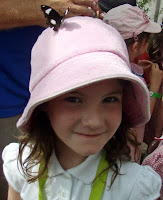 On Monday Inkpen, Carle and McKee spent the day at Butterfly World. We were fortunate to have lovely sunny weather and this meant we were able to fully explore the beautiful gardens.

The children were enchanted by the over sized plant pot and gardening fork. They were able to view the world from the perspective of a minibeast - Now we know what it is like to be ant sized!
The gardens were full of plants and sculptures which tested our senses. We did not know what we would encounter next; from smelling the lavender, listening to running water to looking at the range of colours in the plant beds and touching the smooth wood of a tree.
The butterfly house was an amazing experience. We were able to watch them feed and fly around us, see caterpillars and see the leaves they had been munching as well as clusters of eggs.The highlight for most of the children (and some of the braver adults) was the chance to hold giant snails, cockroaches and stick insects. 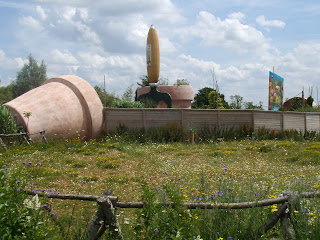 Some comments from the children:-

W - "I liked talking to my partner about the things we could see and going into the flower pots."
F - "It was really good. There were loads of butterflies and you got to see them upside down and all of the colours on them."
R - "I liked the school room and holding the cockroach."
L - "The big big moth was bigger than any one I had ever seen. It was big!"
B - "The big metal ant was the best". 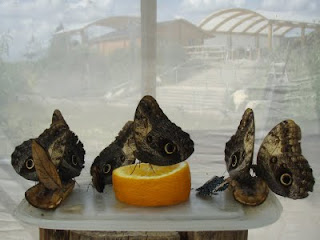 We enjoyed our day and learnt a lot about butterflies and other minibeasts. Most of the children wished we could stay longer and are keen to go again.
Posted by Mrs Matthews at 14:04 No comments: