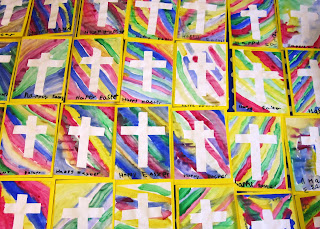 Posted by Mrs Matthews at 07:00 No comments:

As part of our topic on books and stories, all of KS1 took a trip to Ware Library. We were very fortunate that they opened especially for us and so we had the run of the space. 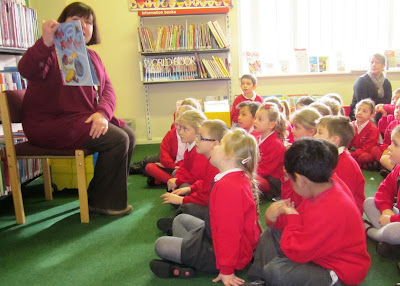 The librarian was very helpful and explained to the children all the different types of items that can be borrowed from, or accessed at, the library. I wonder if your child was able to tell you some of them when they got home? 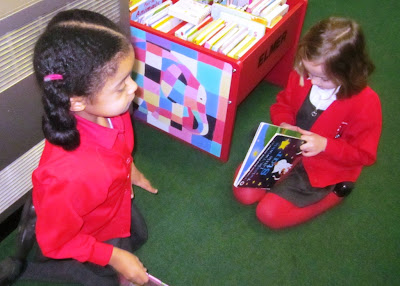 She also, in keeping with the focus of our learning, read us two alternative traditional tales, which adults and children alike enjoyed. 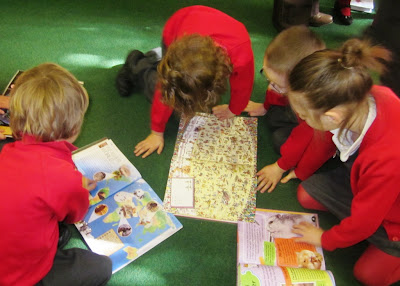 We were all able to look through the book boxes and shelves to find books to suit our own interests. It was also a real delight to see that most of the members of the Reading club are Christ Church children and it was interesting to read their book reviews that are displayed on the wall.
Posted by Mrs Matthews at 17:30 No comments:

The children in Year One got their hands dirty this week when they planted the potatoes as part of their joint learning time. Later in the year we will harvest them and hope they have survived the cold spell that is being forecast. Once again we have planted the Rudolph and rocket varieties.

This afternoon, four Year 5 children participated in the yearly Chauncy Mathalon challenge.  The children took part in various team and individual events, all to do with maths, and were up against 8 other schools.  After coming 4th in 2011 and 3rd in 2012 our aim was to improve on these results and I'm thrilled to say that, after a very close competition, Christ Church came out as winners! 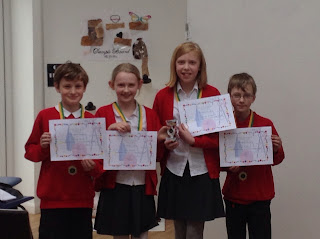 Here is a photo of our winning team of William, Saffy, Rebecca and Fred.  Congratulations to all four! 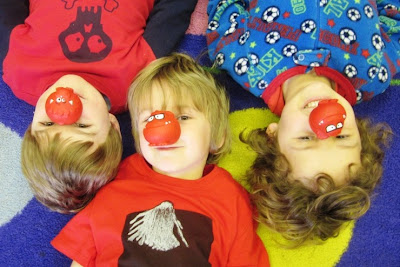 Anyone viewing the children and staff of Christ Church school today might have thought that everyone had got up late this morning. All around the school, and in the playground, were people dressed in the night clothes, dressing gowns and slipper. However, there was another vital clue, lots of red noses.
As our way of raining money to help those less fortunate than ourselves most people in school came dressed either in nightwear or in red. A fantastic £333.39 was raised in total. Well done everyone. 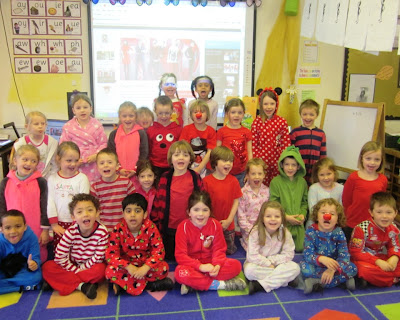 J - I liked wearing my onsie, it was fun.
O - it was funny being outside in my dressing gown.
I - I thought everyone looked really funny sat in the hall in their pyjamas.

Posted by Mrs Matthews at 14:36 No comments:

Just before half term, Horowitz Class learned about Passover by having a Passover meal.  Passover is an important time of the Jewish calendar as Jews remember the time when their ancestors were slaves in Egypt.

The first part of the ceremony is to wash your hands.  It is traditional to do this as it is believed that Jesus washed his disciples' feet before the first ever Passover meal.  Also, washing hands is a sign of respect for God.

The second part of the ceremony involves parsley and salt water.  The parsley would be dipped into the salt water twice to remember the Jews' tears from slavery.

Next, you would take the middle matzo from the pile and break it in half.  The adult would then hide it and the children would have to find it.  We had to find half a matzo that Mrs Adams hid at lunchtime so we had an extra piece!

We would now break the top piece of matzo and then eat it while leaning to the side.  The symbolizes freedom.  Then we would dip our little finger into the wine (we had grape juice!) to show we are not celebrating a sad time.  This is when we started our meal.  We had charoset (apple puree and cinnamon) and some horseradish on a seder plate.  We had all the matzo and we enjoyed it.

"I loved the Passover meal as it gave us a chance to experience different traditions."  SF

"It was really tasty as we had matzos, horse radish and apple puree and cinnamon mixture.  The games were great."  JT 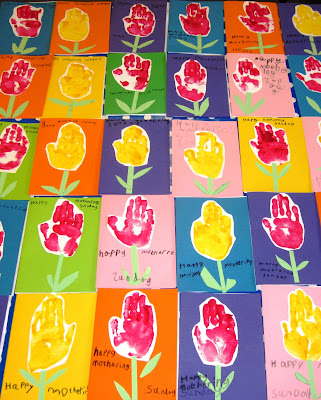 As part of their R.E lessons this term, Hargreaves, Butterworth and Potter have been investigating some of the religious festivals and customs that take place in the Christian religion, at this time of year. One of these is Mothering Sunday. As part of this study, the children found out why we celebrate it, wrote about their own mothers and made a card.


﻿
Happy Mothering Sunday to all of the Mothers associated with Christ Church School.
Posted by Mrs Matthews at 06:00 1 comment:

On Thursday 7th March 2013 Chauncy School opened a special art exhibition for primary schools in Ware and Hertford.  Each school was invited to enter up to 20 pieces of art work from Year 5 and 6 pupils.  We are very pleased to have a section in the exhibition displaying some of the portrait work that Shakespeare, Tolkien and Horowitz children have been working on. 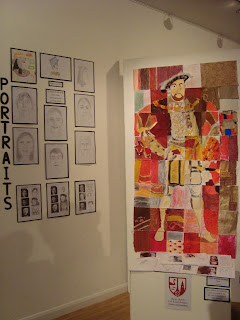 Our section in the gallery

Horowitz Class entered their giant Henry VIII portrait which was created on our Tudor day in November.  The class worked together to create the giant portrait.  We were thrilled to be told that our Henry VIII was 'highly commended'.  Another member of Horowitz Class was awarded third prize for his self-portrait and was presented with a certificate and art pack containing different art materials. 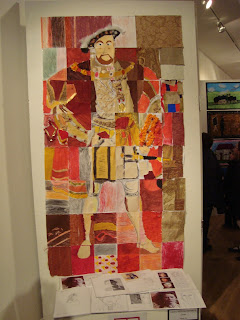 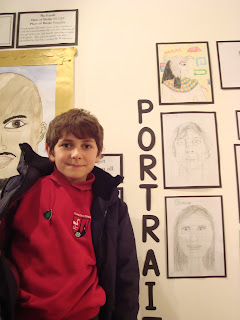 Our third place artist with his winning self-portrait 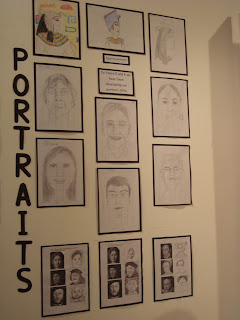 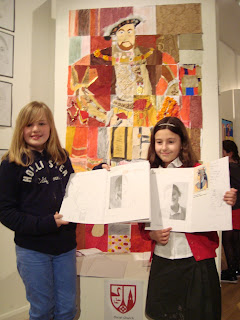 Shakespeare pupils with their art work

Thank you to everyone who came along to see the exhibition.  We appreciate your support.  If you would like to go and see the art work on display the exhibition is open everyday after school from 4-6pm at The Chauncy School.
﻿
Posted by Mrs Anstead at 21:30 4 comments:

Last week the children in Lewis class wrote some fantastic raps all about the Three Billy Goats.  They were so good they wanted to share them, so they did just that!
They visited the children in Carle Class... 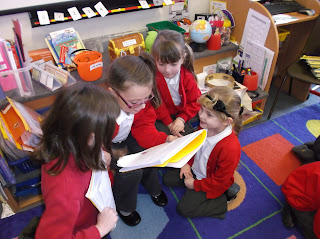 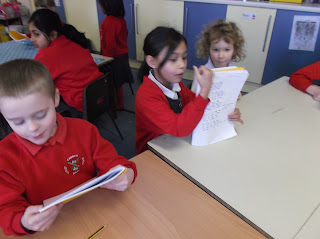 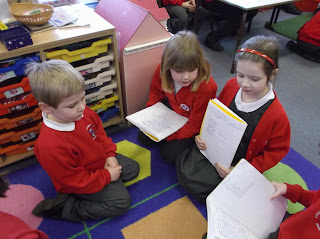 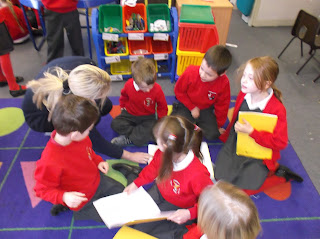 Email ThisBlogThis!Share to TwitterShare to FacebookShare to Pinterest
Labels: Foundation Stage, Year 3 and 4

Last year the children in McKee class took part in the grow your own potato project. They grew the crop in the reception, outdoor area and then ate them. This year all the Year 1 children will be helping with this project.
The dates are set by the Potato council, and because of this Hargreaves class  started the project off by removing the seed potatoes from the box and putting then out in the chitting tray. However all Year 1's will get a chance to help plant, water, care for and harvest the crop.
At the end of the project, in June, we will also cook and eat them.
Any donations of compost would be gratefully received and again any left over will be used as part of the Ware in Bloom wheelbarrow project which we will also enter next term. Thank you
Posted by Mrs Matthews at 13:56 No comments:

In KS1 the children often get a chance to take home a furry friend. This classroom mascot likes to spend a few days with the child and has a diary that can be filled in.
At the moment Potter are waiting for a new friend to adopt them. Barnaby has retired and gone to sunnier climes and Miss Stickley is waiting for their new mascot to make him/herself known. 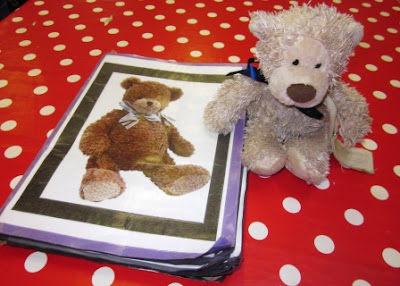 Butterworth have Winnie. Winnie enjoys spending time with the class members and taking part in whichever activities they do. Winnie has been to Beavers, Rainbows, swimming, has played the piano, been roller skating and many many more places. 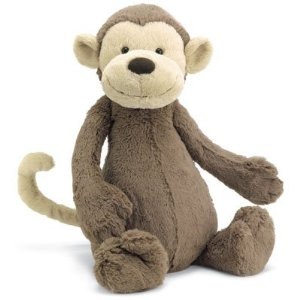 Hargreaves class have Marvin the Maths monkey. Maths Monkey loves to visit the children at home, however he is only happy if he gets to take part in a few mathematical activities such as cooking, going for a walk and looking at numbers in the environment, playing a board game, singing some number rhymes and so on. He has visited several members of the class and has been bowling, played on an iPad, cooked pancakes and been to football. 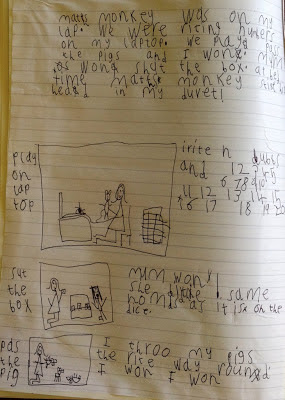 ﻿
Have you been visited by a class furry friend yet and if so what did you do with them?
Posted by Mrs Matthews at 06:00 2 comments:

As you will have seen in the latest newsletter, staff undertook training in the Big Maths programme. KS1 are very keen to get started and to share these new ideas with the children and as such introduced them to the Big Maths Beat That challenge tasks.

As part of Big Maths, each year Group is assigned a set of Maths "Learn Its". These maths facts just have to be learnt. The idea is the children learn them by heart and can recall them as quickly as their own name.
Potter, Butterworth and Hargreaves each undertook the first challenge this week and the children embraced this with the enthusiasm one would expect from Christ Church pupils. The difference for most of the children was that this is a timed task and so, after the motivational music and pep talk, they have a set amount of time to recall these facts and answer the questions. Each child is then given their own score and has the personal challenge to "Beat that" next time.
In order to help the children, this week, Years 1 and 2 have set the Learn Its as homework. Please help you Year 1 child to learn all 7 facts by heart and for Year 2, choose a selection of the facts and learn theses. Your child will work on the others during school and as future homework.

Posted by Mrs Matthews at 21:49 No comments: 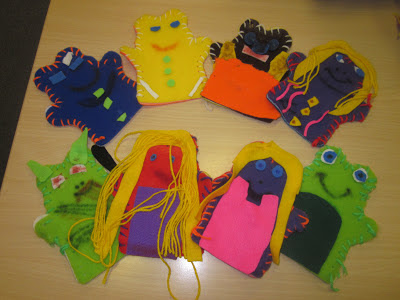 The children and staff in Hargreaves, Butterworth and Potter have really enjoyed their recent topic and had the chance to look at lots of different traditional tales.

Butterworth class performed a fantastic version of the 3 little pigs, as part of their assembly and shared with us the wanted posters they had made to catch the various "baddies" from the stories. They then enjoyed having an adult join them in the classroom and made their puppets. These proved a great hit; with adult and child alike. Miss Ball was able to share lots of positive feedback with the class. 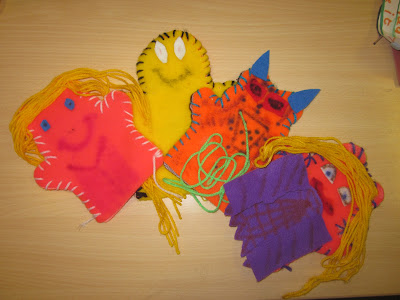 Today Potter class followed suit and invited us to share their knowledge of over 20 traditional tales. They dressed up in a variety of costumes, challenged us to work out which story they were from and they also performed some freeze frame scenes for us.

It has been an exciting topic which has involved stories from many places such as Russia, China and of course the much loved fairy tales we are all familiar with and that Einstein encourages us to read.

Posted by Christ Church at 17:26 No comments: