As you know, we run a variety of after school activities, for the children who attend our school. This term these include storytime, ICT, football, netball, Spanish, dance and Barnabus. 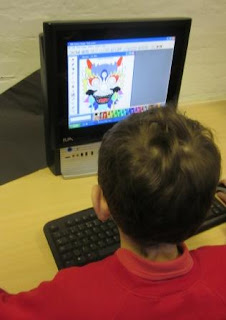 In ICT the children coloured in a dragon mask and printed it out. They then made it into a mask to wear adding decorations. "I enjoy ICT club because we get to do interesting things and can use the computers."- E. "ICT is great fun, we did a mask." - A 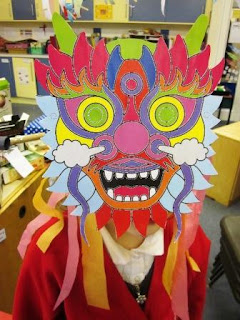 This week in storytime the children heard the story of the Gruffalo and than made Gruffalo puppets. "I like storytime because it is good to read books." - E "I like stories." - S. 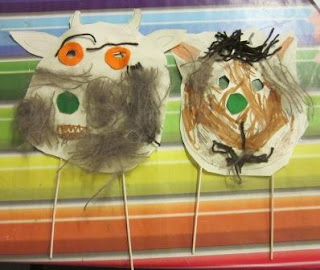 The footballers are assisted by members of Chauncy school and Spanish is run by Mrs O'Reilly. 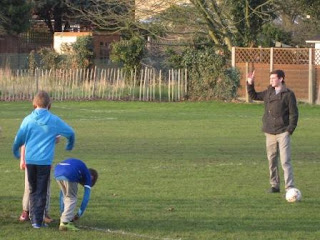 "Netball club is great fun because we love netball." - I. "Miss Ball is a good umpire." - A

In Barnabus club (which incidentally is now on Thursday and is open to years 1-6) the members spent sometime planning what they would like to do this term and are looking forward to some role play and construction activities based on a Bible story. "I like Barnabus because we get to watch a DVD and choose what to do" - F.

Hopefully some other children, will soon, let you know what they like about their clubs.
Posted by Christ Church at 14:47 1 comment:

On Thursday 26th January Christ Church school played an away football cup match against .
All the players tried their best and put in some good tackles especially our main defender Jake H. Unfortunately we conceded a goal in the first half. We could have won if we controlled the ball before we shot to get more accuracy.
In the end it was a close game and our Man of the Match was Samuel S. 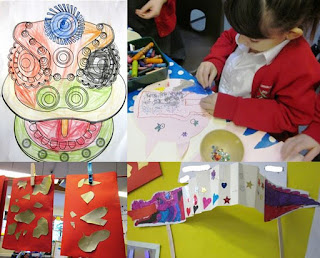 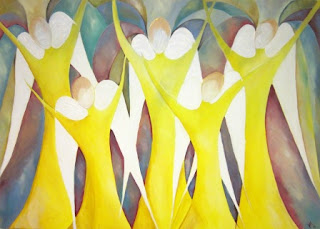 We are delighted to announce that the artwork given to us by Victoria Halls is now hanging in a prime position. Next time you enter school, through the main door, look to your right and enjoy this beautiful painting.

Mrs Halls said that she was reminded of this painting during the school Christmas play and so kindly gave it to us as a gift. She has also offered three prizes, of an artistic  nature, to be awarded to the winning entries of a competition that will be set by Mrs Vaughan relating to this painting.

We have learnt this by comparing nurses past and present, ordered events in Florence Nightingales life, some drama about feelings and a diary that Florence might have written.

We are looking forward to finding out more about Florence Nightingale over the next couple of weeks. 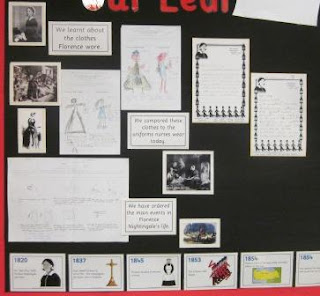 By Butterworth Class
Posted by Miss Glazebrook at 13:19 1 comment:

What do you know about ice?

Mckee class have spent the week looking at and investigating cold weather and lots of ice came into this.

We were fortunate that we have a couple of frosty mornings and so were able to, once again, draw in the frost and write our names.  We found ice in the  water tray and on some of the toys. 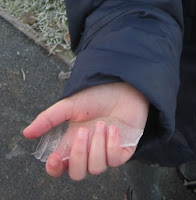 The children donned their wellies and walked on the frost H - "It is slippy", D - "Don't run you will fall over" E - "The grass is crunchy and white", R - "The grass is hard", O - "Everything is sparkly, E - "Jack Frost has been very very busy!" 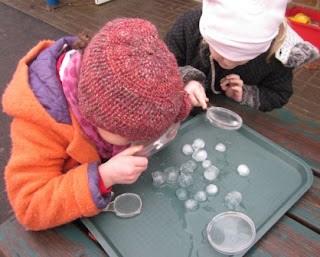 All the reception children had a chance to look at ice cubes and use the magnifying glasses to see what they looked like close up. The children discovered that they were "smooth and cold to hold, but close up were full of lines, zig-zags and bubbles." Some of the children recorded what they saw  by drawing on paper, others asked the adults to help write down their findings or to take a photograph. 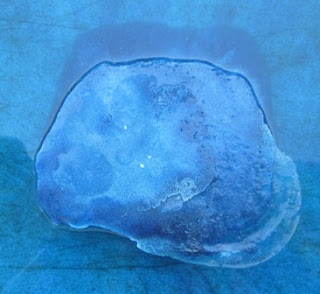 We tried putting a "blue iceberg" into a tray of warm water to see what happened. A -"Wow, it melts and the water goes blue" and the children tried to predict whether ice would sink or float. The class was split half and half and so were surprised at the result. 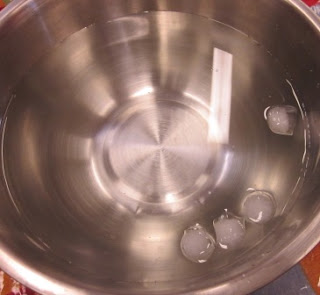 A few children had been ice-skating, some have watched Dancing on ice and most remembered that we used ice when we made Ice cream. Thank you to E and G who brought in some photographs of an icy lake.
Posted by Mrs Matthews at 20:20 1 comment:

We had a request for an updated weather forecast and so here it is with one of our other talented forecasters. We hope it is useful!
Posted by Mrs Matthews at 11:30 2 comments: 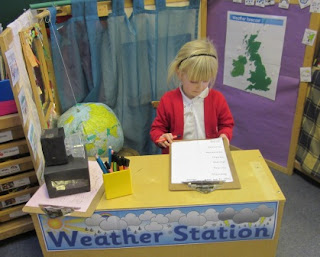 This week, the children in the foundation stage have been looking at weather and in particular, windy weather.

In both Carle and McKee windmills were made made and kites "flown" .

Unfortunately, for us, it has not been a particularly windy week outside, however the children ran about to get their kites airborne. This proved to be no hardship and was enjoyed by those who took part. The kites looked very colourful and lots of fun was had.

Inside we talked about how to make air move and how to use this power. We attempted to do this by making paper fish and paper fans and flapping the fish from one end of the "lake" the the other. The children discovered that they needed to be quite careful where they directed the wind, just waving the fan made the air move, but not necessarily the fish. Without exception it brought big smiles when they worked out just how to make the fish move.

Both classes have also tried their hand at weather forecasting. Each have a weather station set up where they can fill in maps and charts and make their observations and predictions. They have also watched a clip of a BBC presenter  to see how this is done on television each day and we are making some of our own.

We made the most of an overnight frost, by taking a break from the wind, and going outside to find out about frost. The children noticed that the air was much colder than on previous days, A - "I can breath like dragons do."  J - "I need my hat and scarf." O - "The cold is crunchy." 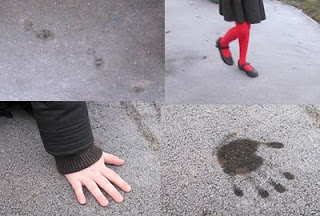 We all tried making marks and patterns in the frost:
H - "My hands are hot and so they melt the frost."
R - "You need to take your gloves off because they keep the warm inside you."
E- "Feet don't work well because they have shoes."

Mrs Aldiss showed the children how to rub their hands together to warm them up again by making heat from the friction.

Over the last week McKee class have read The Polar Express several times. We have looked at the illustrations, we have read and discussed the text and we have rung the sleigh bell to make sure we can still hear it. (We can - phew!).

We have talked about the differences and similarities between the book and the film and had some really interesting discussions. The class were surprised to see that there is a lot more shown in the film, where as the book requires them to use their imagination. When we talked about this they understood why and some thought it was more exciting to do this.

The class have really enjoyed this book and, much to the surprise and delight of Mrs Matthews, most said they preferred the book to the film.

A - "I liked reading and turning the pages not knowing what was going to be on the next page."
E - "The pictures made me think."
O - "The book does not have as much as the film."
R - "In the film the birds eat the scrunched up ticket. In the book they don't."
N - "I wish it was me."
A - They go like a roller coaster, that is scary."

I wonder which you prefer, do let us know.﻿
Posted by Mrs Matthews at 19:27 No comments: 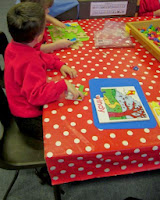 Mckee class enjoyed their first day back at school and all seemed pleased to have returned.

John Hookway, our vicar, came and said a special blessing for the reception children and staff. Thank you John.

Everyone seems to have received lots of lovely Christmas presents and many children got the things they told us were on their wish list to Father Christmas. Luca was delighted to have got the teddy he so wanted. "He sleeps in my bed and I got just want I wanted. My sister got a dog because the teddy was just for me".

Other children brought things in to show us and we admired several books, soft toys and a transformer.

Our Topic for the next few weeks is weather and today the children told us some of what they already know about the weather.

O - "Snowflakes are pretty."
E -"You can splash in puddles when it rains."
J - "I have snow fights with my brother, he always wins."
A - "I eat lots of Ice-cream when it is sunny."
N - "You can go to the beach when it is sunny. You would not go when it rains because you would get too wet."
R - Kicking leaves in the wind is fun."

Over the next couple of days we will find out what else the children know, what they would like to find out about and what activities they thing we could do that relate to weather.

Happy New Year
Posted by Mrs Matthews at 18:24 No comments:

Welcome back to Inkpen .Kipper has had a happy Christmas and is looking forward to our topic about the Weather . We look forward to seeing you all on Wednesday 4th of January. Wishing you all a Happy New year.
Posted by Mrs Morris at 12:12 No comments: