Reception fun in the snow - part 2

You may remember we left our ice art out and wondered if it would still be there. Although most of the ice cubes on the tree had melted, the water tray art was still there, but was covered with a thick layer of snow. We made an igloo and added some small animals and used it was a polar landscape. 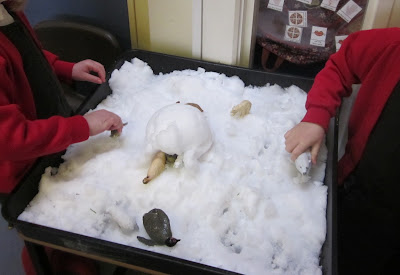 When we came indoor we transferred some of this to a tray inside so that we could carry on our adventure. The snow lasted most of the day. 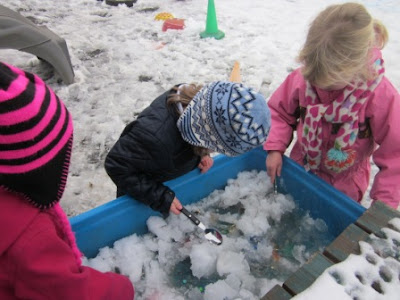 When a lot of the snow had melted we were able to see our ice art. By using spoons we rescued some of the items frozen in the now softer ice and picked them out. Once we mashed up a lot of the snow, we made a pool for the penguins to swim in and ice hills for them to slide down. 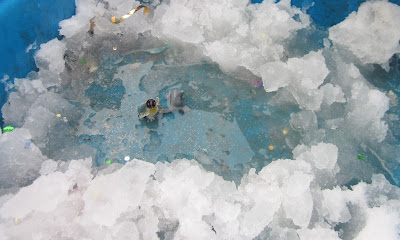 We also made hand and footprints in the snow. D - you had to press hard to make the shapes, rolled balls of snow Z- this was fun and we went for a funny snowy walk copying actions. R - I liked walking backward and marching in the snow. I was also a penguin. 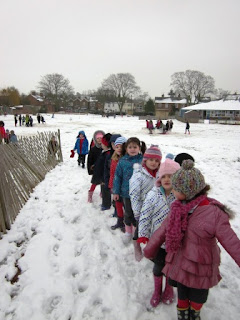 Back inside some children used toothpicks to collect the sequins that were hidden in tubs of snow, we looked at the penguin homework and toys, wrote and drew some snowy pictures and words and melted snow with salt. 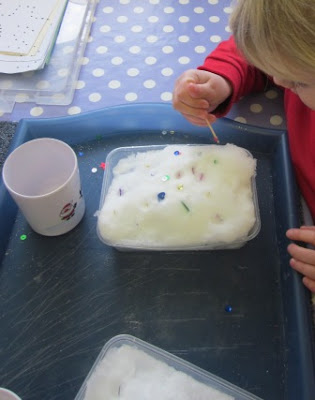 Mckee class all said they had had a great day and the words amazing, brilliant, lots of fun and the best day ever were said when we sat down to talk about what we had learned today.﻿
Posted by Mrs Matthews at 20:20