In McKee class we are beginning to look at Spring festivals.
We have looked at Mothering Sunday, why we celebrate it and why it is different to the American Mother's day. We have begun to think about Lent and Easter and we enjoyed finding out about the Hindu festival of Holi.
During the festival Hindu children get the chance to throw coloured powder paint at each other. We decided that even though this would be fun, we did not think it would be appreciated by those of you at home who have to do the washing! We opted for throwing "tissue paper squares" instead. 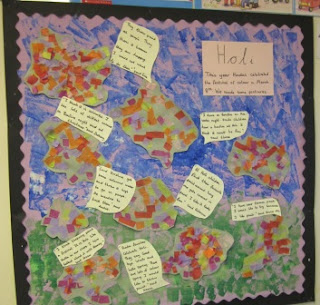 N - Holi is when Hindu people say goodbye winter, hello spring!
R - At Holi children flick their favourite colour paint around. I think it looks like fun.
G - I have never thrown paint. I would like to do that.
E - I have a bonfire at firework night. Hindu children have one at Holi. I think that is fun.
E - They throw paint at people, they throw it because they are happy. I would not want to do that.
Z - I think it is colourful. I see lots of colours at bonfire night and Christmas.
Posted by Mrs Matthews at 19:54